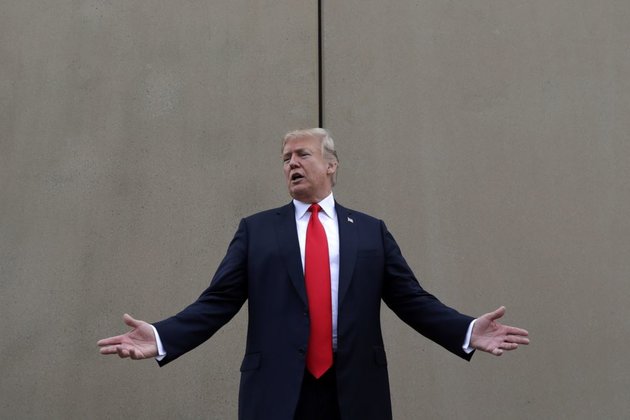 $5 Billion for the Border Wall and Standing Firm

President Donald Trump began insisting on $5 billion for a border wall between the U.S. and Mexico at the end of November after submitting a budget that contained $1.6 billion for border security, including parts of the wall.

'I am firm,' Trump said of his $5 billion demand in November.

Twenty-six days into a government shutdown, he is still firm. But what is not clear is why he is holding firm at what he now says is $5.7 billion for a wall to 'stop the crime at our southern border.'

'He totally changed his own budget,' Democratic Sen. Chris Van Hollen told MSNBC news last week. 'They asked for $1.6 billion. And now at the very last minute in December, they came back with this request.'

Trump first kicked around the $5 billion figure in July when it was buried in a Washington Post story about budget discussions between the administration and Republicans.

'Trump never formally requested $5 billion for the wall, instead communicating the number privately to lawmakers in recent weeks,' the Post said.

A few days later, Trump threatened to shut down the government.

'What the president wants to do is get a bigger down payment so it (the wall) can be built faster,' former House Speaker Paul Ryan said in a speech at the National Press Club in October. 'We intend on having a full-fledged discussion about how to complete this mission of securing our border, and we will have a big fight about it.'

Locked in a stalemate since Dec. 22, the conflict between lawmakers and the president has shut down parts of the federal government for nearly a month. Newly elected House leader Nancy Pelosi is standing firm on zero dollars for the wall.

'The fact is, a wall is an immorality. It's not who we are as a nation,' she has said.

The Department of Homeland Security has estimated that $5 billion would pay for 375 kilometers (234 miles) of a 'new physical barrier' on the southern border with Mexico that stretches more than 3,100 kilometers (just under 2,000 miles).

'We know that a border wall system works,' a Customs and Border Patrol official told reporters at a briefing Wednesday, his wording suggesting that a wall would not work by itself.

The U.S. government oversight agency, the General Accountability Office, reported last year that CBP lacked the data to fully determine the cost-effectiveness of the border wall.

'CBP does not have complete information for prioritizing locations to use its resources in the most cost-effective manner,' GAO officials noted in August 2018, and not for the first time. The year before, another report by the agency spelled out similar problems.

CBP did not respond to a VOA request Wednesday for an update on the status of that data, which it had pledged would be completed by this month.